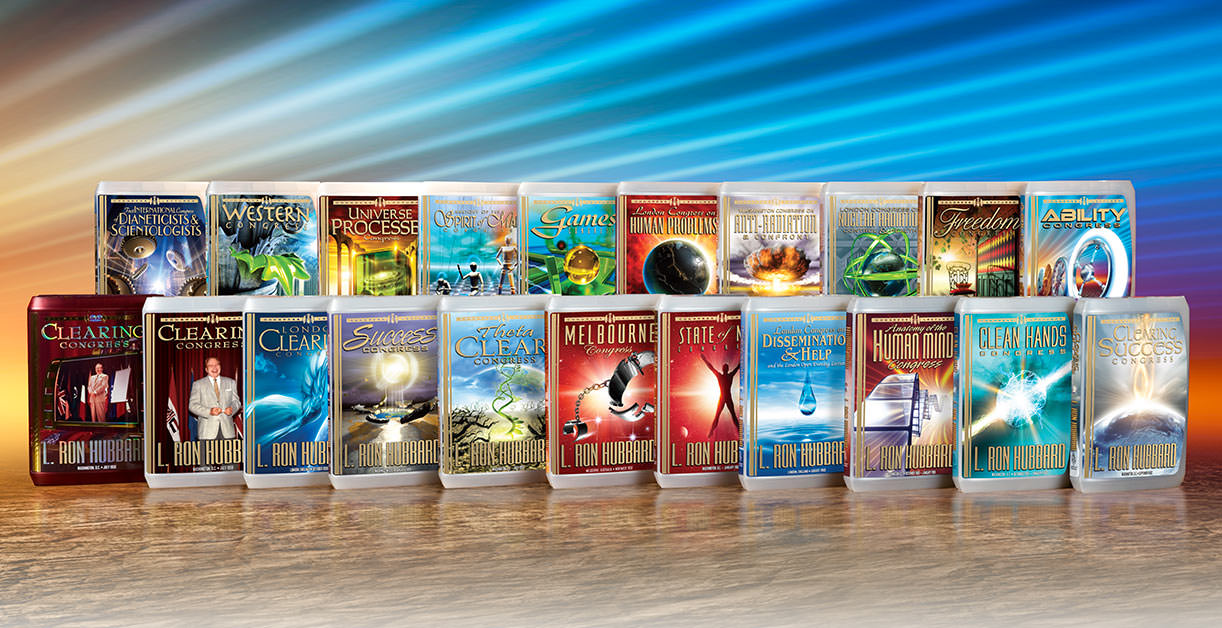 The Congress Lectures are L. Ron Hubbard's special events containing his announcements of each new milestone breakthrough. They were attended by one and all—auditors and preclears, experienced Scientologists and people brand-new to the subject.

L. Ron Hubbard’s quest to answer the riddles of Man encompassed over three decades of investigation to the discovery of the Reactive Mind and the publication of Dianetics: The Modern Science of Mental Health.

Yet if that path of research to May 1950 had been extensive, the subsequent decades were fully unrelenting.

First, catering to a wildfire movement sparked overnight in the aftermath of Book One, Mr. Hubbard had case after case with which to work—providing him the vast diversity of human existence in all its glory, degradation and complexity. And in this manner, continuing to instruct auditor courses while also personally working those individual cases, came a  steady advancement of breakthroughs, beginning with the discovery of theta…opening the curtain to past lives…and with even more startling revelations contained in that whole track of existence, the discovery of life energy…the potentials of a being as an Operating Thetan…the means to exteriorization…and through it all and in just four years…the complete evolution of the subject from Dianetics to Scientology.

But, as L. Ron Hubbard said, in seeking full application to others, his task was then to undercut the current level of Man. Specifically, having isolated the fundamental laws and axioms of Scientology, he had the basis for all future research in the codification of materials and processes to make the attainment of their full potentials available to every being.

And so it was that while continuing to work with auditors, instructing them in Advanced Clinical Courses (ACCs) and Professional Courses, his discoveries were recorded in more than 3,000 lectures which, step-by-step and in their entirety, provide the grand panorama of understanding the human mind and secrets of life that is Scientology today.

Yet also contained within that chronology of consecutive developments are milestones, breakthroughs of such major significance they formed the next giant leap in building the Bridge for all to travel. Those milestones, those giant leaps, are precisely what are found in Mr. Hubbard’s Congress Lectures.

And now, for the first time, they are all available to you.

When it comes to “being there with Ron,” there is nothing closer than hearing his Congress Lectures. And that is precisely what he intended when he first presented them. For well in excess of his training lectures to auditors in the course of daily instruction, Congresses were a much rarer affair—every one an event in itself!

Typically held twice a year, most often in London and Washington, DC, yet also in such diverse locales as Phoenix, Melbourne and Johannesburg, Congresses were attended by those from all over the world: auditors and preclears, Scientologists new and old, and even their non-Scientologist friends—everyone was welcome.

And what they heard were his announcements of the latest breakthroughs and developments, each one opening a new gate to personal freedom and ability and placing the next major block in building the Bridge we have today.

Every series contains a complete body of Dianetics or Scientology technology, detailing both its use in auditing and its application across all parts of life to the creation of a new civilization. In that regard, Congress Lectures contain Mr. Hubbard’s programs to be applied by every Scientologist in their own zone of activity and which, as a combined whole, form the vital elements to clear the planet.

But most of all, these lectures are for your personal gain and progress. For here are the traps unlocked, one by one, and the knowledge to stay free of them forever. That’s why Congresses are the lectures to be heard by every Scientologist.

While each Congress encompasses its own subject and can be heard by itself without prior study, a chronological study has the benefit of allowing you to see how the subject progressed and which are the highest levels of development.

But no matter which Congress you listen to next, you will want them all. For L. Ron Hubbard’s Congress Lectures contain far more than the watershed advances that built The Bridge to Total Freedom. There’s also that special air of something more. It’s what Scientologists speak of when trying to describe the unique feeling one gets just from listening to him. Where the complete experience far transcends even the magnificent data itself. All of which is to say, the very essence of what millions have come to know and love as “Ron’s lectures”—those are the Congresses.